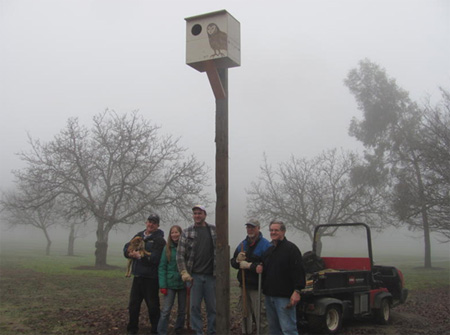 Barn owls are cavity nesting birds of prey but they do not create their own nest holes. Instead, they frequently use cavities from other birds or hollow trees, and they readily move into nest boxes. With the right nest box, it is possible to encourage barn owls to become permanent residents.

At Boundary Oak Golf Course, we wanted to encourage barn owls to nest because they are efficient hunters that prey almost exclusively on small rodents such as mice, rats and gophers. With hungry barn owls in the area, less money will be needed for rodent control and because they are nocturnal birds, barn owls would rarely bother our golfers or employees.

Despite the fact that barn owls are one of the most widespread owl species, they can be finicky about where they nest. Open areas are best, including grasslands, marshes and fields. Some sparse woodlands are acceptable, but barn owls generally avoid very dense forests that are a preferred habitat of great horned owls, one of their natural predators.

To encourage barn owls to nest in appropriate areas, we need to avoid using chemicals to kill rodent populations. Concentrated poisons in the rodents can be harmful to the owls, and barn owls will not nest if there is insufficient food.

Barn Owl nest boxes should be placed at least 15-20 feet high, and the opening should be shaded from the sun and wind. If the box is mounted on a pole, use a baffle to prevent cats, raccoons and other predators from reaching it.

In February 2011, Boundary Oak Golf Course Superintendent Eddi Wahlborg and several Eagle Scout troop members built and installed 6 Barn Owl boxes around the course. In the past year, we significantly reduced the use of poisons and as a result, have seen a significant drop in the rodent population thanks to the Barn Owls!

Ready to Reserve your Tee Time?